Place: Discovered by a Sri Lankan businessman. Currently the rock is owned by M.S. Hameed. The rock was featured in an article in Khaleej Times which can be found at the bottom of this page. 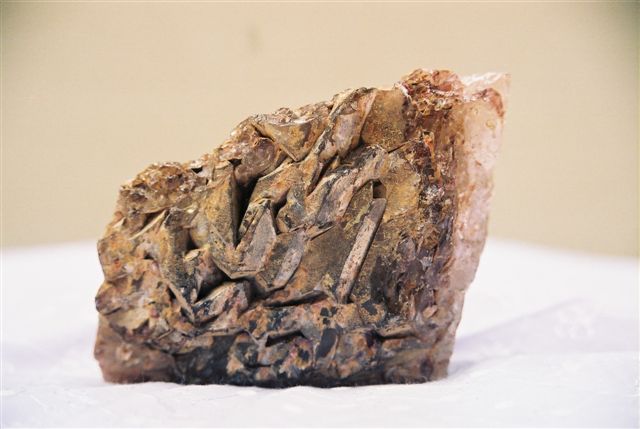 This is no ordinary rock (in Khaleej Times page 6)

ABU DHABI - This is no calligraphy - or any other type of man-made artwork. It is a nature-made artefact that manifests the magnificence of Allah in a finely-finished Arabic calligraphy style.

This naturally formed rock, which bears the name of Allah, The Almighty and Prophet Mohammed (Peace Be Upon Him), was discovered by a Sri Lankan businessman who brought the stone to the region so that it can be kept in a museum or any other safe place.

M. S. Hameed, who is in Abu Dhabi visiting relatives, contacted Khaleej Times to share, what he describes, as blessed signs of Allah, with the largest possible number of people.

"This a miracle of Allah. It is a magnificent artefact. It's beautiful formation which is nature-made excels the finest decorative arts of calligraphy," said Mr Hameed, who himself is an artefacts collector.

He claimed that the letters appearing on the rock are formed in the same order as in the seal of the Prophet.

"The most significant is the way the letters are written in the same order as in the seal of Prophet Mohammed (PBUH) which is illustrated in the encyclopedia of Islam, Letters of the Prophet.

According to a calligraphy expert who studied the piece of rock, the inscription of the words (Allah), (Mohammed) and (Rasool or Prophet) were found to be naturally created.

"This is no artificial work of art as no man could make such a genuine and marvellous work of art," said Masliya Farook, a specialised expert in art and calligraphy.

"I think this piece of semi-precious stone is of immense historical and cultural value to the Muslim community throughout the world," added Mrs Farook.

The precious stone has also been certified by the Sri Lankan Gem Testing Laboratory as a natural genuine quartz rough specimen that has not been tampered in anyway.