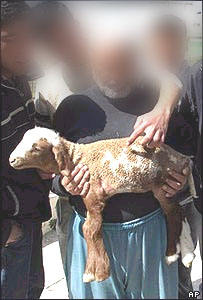 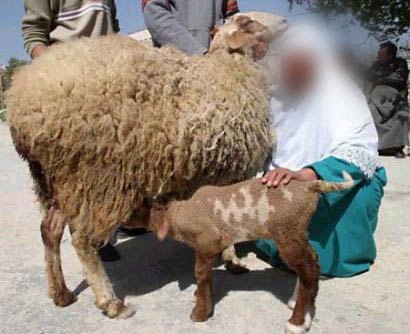 Palestinians have been flocking to see a lamb which seems to have a birthmark spelling out the Arabic word for God, "Allah", in its coat.

Owner Yahya Atrash, from the West Bank town of Hebron, told Reuters the animal was born on Monday, when militant leader Sheikh Ahmed Yassin was killed.

He told Reuters the timing was "clear evidence of God's existence".

Sheikh Yassin, spiritual leader of the Hamas militant group, was killed in an Israeli missile strike.

Israel says he was involved in planning suicide attacks.

"This sheep was born in memory of the martyrdom of the great hero Sheikh Ahmed Yassin," the farmer said.

Many Palestinians travelled through several Israeli army checkpoints to view the lamb, who some claim also has "Muhammad" written on his other flank, after the Prophet.